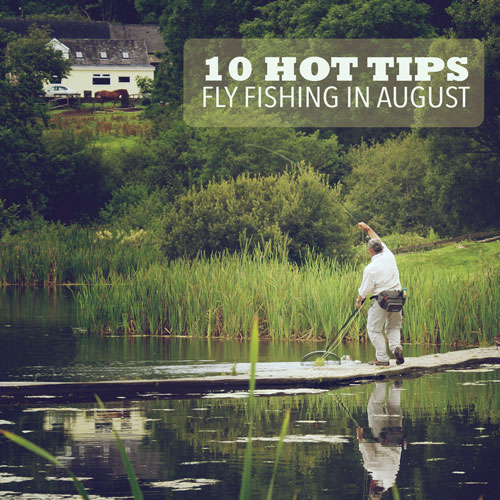 With the Summer underway and everything looking lively and abundantly green it might be some of the best weather to be out on a boat or bank to soak up the rays and have a great time with family or friends. For us it’s also a great time to get out and film some of the great looking countryside with early mornings and late evenings. However at the peak of summer the fish can seem to take a break too and August can be a tricky time not only to film but actually catch fish. So Hywel has put together his list of 10 HOT TIPS to help you through the summer holidays when you have a fishing itch to scratch.

August is a very funny month and any tactic can work on its day. The important thing is to be flexible and be prepared to try anything (legal that is!) Due to this I carry a vast array of lines which enable me to change tactics and fishing levels easily. I used to carry 20 or so lines but that just keeps going up and up and at the last count it was over 50. I will always double up on my most popular ones as there is nothing more frustrating than finding a line that works and then trapping it in your boat seat or stepping on it.

During this time of year the best fishing can be enjoyed early in the morning when most sensible people are still in bed and late into the evening. Most of the fish will be feeding then and can be great sport on both dry fly and nymphs.

Being a competition angler I dread this month as it can prove to be the most soul destroying month of all. Many a time I have sat in a boat roasting to a crisp contemplating golf as a hobby. Over the years the competition scene has had some bad publicity but I do enjoy competing and it is also a fantastic way of making new friends. You are placed in a boat with a stranger and by the end of the day after working together trying to beat the fish you become the best of friends. Due to competitions being run between 10am and 6pm (the worst time of day) anglers have to be resourceful and inventive to make the fish that have had their fill in the morning, take the flies. This is why the competition scene in the UK is at the forefront of angling when it comes to lines, materials and tactics. (Mind you at times results in the World Champs don’t suggest this)

Lets take a look at some of the cast set ups that may be what the fish are looking for.
The cast below covers most aspects of fishing and if you are not sure what to do then try this one. The cast is set up as follows leader loop to top dropper is 4ft and then 3.5 ft to the next three flies. Top dropper is an attractor pattern like the blob then two nymphs are placed in the middle and a booby on the point.

Jack of all casts illustration

You can use this cast on all density of lines and it is fished as follows.

First cast out as far as possible then for the first few yards strip quite quickly, this will create a disturbance on the surface and may be attract fish to your flies. Do this until the booby sinks. At this point slow everything down as the booby will provide some resistance enabling you to fish the nymphs slowly and will also maintain the flies at an uniform level throughout the retrieve. As you come to the end of the retrieve speed up and hang the booby and allow it to float to the surface under its own steam. Some people think that blobs can only be fished fast but I catch more fish when fishing it slow. One year during one of the TFEO ‘Floating line eliminators’ on Stocks reservoir I caught 18 fish, 17 of them on the blobs with a slow figure of eight retrieve on a floating line.

This time of year something out of the ordinary will be exactly what the fish want. I love trying out new things some which never work but on the odd occasions it does work. One of those is booby popping and this is one of the most visual ways of fishing. Don’t think that this is a new thing fishermen have been doing this for years but using muddlers greased up and pulled through the surface. The booby offers more water displacement which can prove irresistible to the fish. I always carry 3 sizes of boobies so that they can be fished on different lines. The smaller eyed ones are fished on floating lines, the medium on intermediate lines and the biggest on the medium and fast sinking lines. For this tactic place the booby on the top dropper and two nymphs below. The booby is pulled through the surface creating a V behind it; some times it pays to create more disturbances by pulling faster making the booby pop through the surface. This will attract the fish to your flies and what I have found that rainbows tend to attack the booby, where as browns tend to take the nymphs behind. Anglers tend to say that this tactic only works on stupid stock fish but I have had this work on wild rainbows and browns in Australia’s snowy mountain lakes.

The reverse of the last method is the washing line where the booby is placed on the point with nymphs above it. The booby now acts as a level regulator. The depth that you want your flies to fish is dictated by the sink rate of the line. The booby will slow the retrieve down as it pushes against the water and again I will carry 3 sizes of eyes. When fishing shallow water or when the fish are cruising near the top and you want to fish your flies within the top 12inches then I will use a floating line with a small eyed booby as this will sit in the surface and give you some resistance whereas the big eyed fly will sit on the top of the water and offer no or little resistance.

If it is really hot and you want to fish your flies deep without snagging the bottom then there is no better cast. I will use my fastest sinking line and cast as far as possible and allow my flies to sink as deep as possible while maintaining contact by a slow figure of 8 .This will allow you to fish the flies slow and deep while the booby keeps the flies away from snags.

If you are fishing during the day then this is very important. You must go and find feeding fish if there are any. This is when boat fishing is far more productive than bank fishing. It enables you to drift and cover far more water while not working too hard. It also enables you to fish deeper water where the fish could be feeding due to the water temperature. One important point is to get your drogue set up correctly, I personally like a para drogue but attached to the centre of the boat. This enables you to vary the drift by moving the position of the rope. Move it closer to the bow will hold the bow back and bring the stern around and visa versa. I personally do not like using a drogue which is attached both to the bow and stern, while this does give you an even, straight drift most anglers leave the drogue in the water even while motoring which in my mind is a recipe for disaster.

9 – Always know where your towel is

On those hot baking days nothing can be more frustrating than having tangles in you fly line. This is due to the heat drying it out in the bottom of the boat as you retrieve it. To prevent this take a towel with you and soak it then place it where you are going to place your retrieved line. This will keep it wet and will also stop it finding those snags on the bottom of the boat. If it is really hot then every so often poor water on the towel to keep it wet.

The last area I will cover comes under self preservation. Firstly take enough liquid with you (not alcohol); I carry 6 bottles of soft drink and a couple of water. I know this sounds excessive but you can always bring it back with you. Remember to drink little and often and not when you are thirsty as this is too late and your body is already starting to dehydrate. The next is one of the most important and that is suntan lotion preferably sun block as not only do you get burned from the sun’s glare but also from its reflection off the water. Once you have applied the lotion don’t forget to wash you hands as the lotion does stop a sinking line sinking. The last is to be prepared for anything and carry you waterproofs even if the forecast says it going to be a nice day you never know.

Enjoy your summer time fishing and we’ll catch ya later.